The 19th art KARLSRUHE took place from 7-10 July 2022. Find out here what moved the art world in Karlsruhe.

The 19th edition of the art fair attracted a total of 30,000 visitors to Karlsruhe, the UNESCO City of Media Arts. Not only summer art enjoyment, but also the acquisition of art was in the interest of the Karlsruhe public. From 7 to 10 July, the halls became a showcase and marketplace for art spanning over 120 years. For five days, 215 exhibitors from 12 countries, including Turkey, Greece and the USA, transformed the Karlsruhe Exhibition Centre into a multifaceted show and market place for art of all kinds, with a particular focus on painting, sculpture, photography and editions. The fact that the charisma of art KARLSRUHE remains unbroken even after the break in the fair due to Corona is shown not only by the participation of the participating exhibitors, but also by the feedback from the gallery owners...

Britta Wirtz, managing director of Messe Karlsruhe, looks back positively on the past few days: "The transfer of art KARLSRUHE from its traditional place in spring to summer, which became necessary this year, has been very successful. As a crowning conclusion to our trade fair restart, art KARLSRUHE was also able to demonstrate the diverse potential of Karlsruhe as a city of culture. The media attention given to art KARLSRUHE not only advanced Karlsruhe's image as a city of art, but also provided a stage for its designation as a "UNESCO City of Media Arts". The close connection between the fair and the city was noticeable, for example, in the appearance of the Karlsruhe Cultural Office or the ZKM in the newly designed Hall 3."

The sculpture space of the artist Rosali Schweitzer (presented by the Galerie an der Pinakothek der Moderne) in Hall 4.

A stroll through art history

With 47 galleries from abroad and about the same number from Baden-Württemberg, this year's art KARLSRUHE presents itself as a prominent meeting place for the industry, both for the international art business and for the regionally based galleries. "A visit to art KARLSRUHE is thus always also like a walk through art history," says curator Ewald Karl Schrade.

With 180 one-artist shows, 24 sculpture spaces and two special shows, art KARLSRUHE 2022 offered art lovers not only the tried and tested in a new light, but also innovations that creatively showcased the real encounter with art.

There was great joy in Karlsruhe over the return to real encounters with art. Credits: Messe Karlsruhe / Lars Behrendt

Innovations for a more relaxed enjoyment of art

A changed hall structure invited art lovers to exciting discoveries. In the front halls, visitors could expect art of classical modernism and art after 1945. ContemporaryArt 21 was represented in Hall 2. The tour was completed by the newly designed Hall 3, which, in addition to the special shows, was also home to the ARTIMA art Forum.

"We are registering great popularity for the new hall concept. Despite the consistently high number of exhibitors, the halls appear larger thanks to spacious cross corridors, the wider aisles not only offer space for artful strolling but also contribute to a more relaxed atmosphere in the halls", Schrade further emphasised.

There were also innovations in terms of scheduling, with the Preview (6 July) and the Vernissage (7 July) each having their own day for the first time. This gave a large number of institutional buyers, art dealers and collectors the opportunity, especially on the first day, to take a close look at the programme on offer.

"If this keeps up, I'll have to go back for more artworks. The first day went great, the gallery sold some large format works of mine. I think the equalisation of preview and vernissage is good. You simply have more time to engage more intensively with people who are used to buying art," said artist Stefan Gross, for example, describing his impressions.

"We are well networked internationally. art KARLSRUHE is a great building block in terms of our presence in Germany. We have seven artists from seven countries on four continents as a selection from our gallery portfolio. In autumn, we will open a new branch in Palm Beach. We are happy to be in Karlsruhe for the first time and are enjoying the summer appointment," says Eva Maria Ostendorf, Director of Kristin Hjellegjerde Gallery (Berlin/London), for example.

Galerie Anja Knoess (Cologne) and Galerie Geiger (Constance) also liked the restructuring. "I think the equalisation is great. It allowed me to concentrate on important collectors," said Dr Stephan Geiger of the gallery of the same name.

At the summer edition of art KARLSRUHE, the focus was not only on enjoying art, but also on acquiring art. Credits: Messe Karlsruhe / Jürgen Rösner

Not only was the return to a real encounter with art duly celebrated at the summer edition of art KARLSRUHE, but many galleries were also very pleased with the sales.

Galerie Schacher - Raum für Kunst (Stuttgart) drew a positive conclusion from the fair in Karlsruhe. "We were able to sell the largest exhibit by our artist Shalva Gelitashvili. The work "Purple Rain" shows an oil painting on demolition windows and caused great astonishment at our stand. Claudia Thorban's acrylic glass panels printed with nature motifs have also found many new fans," says Marko Schacher, owner of Galerie Schacher and one of the advisory board members of art KARLSRUHE.

Galerie Eric Bausmann (Halle) also recorded satisfactory success after a short time: "We are very pleased. On the second day, we had already re-hung about half."

A special sale was achieved by the salon gallery "Die Möwe" (Berlin). After the work "Madeleine in the Mirror" by Lotte Laserstein, long thought lost, was presented to the public for the first time at art KARLSRUHE, it did not take long to sell the work. "There is a lot of interest among the visitors. In any case, Lotte Laserstein and overall the interest regarding women is greater than towards their male colleagues," says Claudia Wall of "Die Möwe". 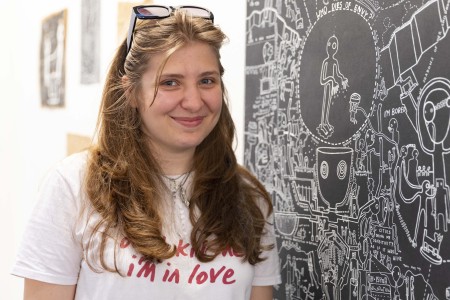 art KARLSRUHE as the most democratic art trade venue

The diversity of this year's art KARLSRUHE programme was the main feature. "A programmatic focus away from the temporal structure can hardly be found this year," explained curator Ewald Karl Schrade. "That is precisely the beauty of our fair: the inconceivably great diversity of positions that are in dialogue with each other," Schrade continued. Around 1,500 artists could be seen through the programme of galleries at the fair. Both up-and-coming young artists such as the winner of the art KARLSRUHE prize Ambra Durante (Friese Gallery), who was born in 2000, and big names of art history such as Lovis Corinth or Heinz Mack were presented.

This range was also reflected in the price segments on offer. Thus, art KARLSRUHE saw business transactions for works with prices in the six- to seven-figure range; but there were also numerous titles for newcomers that could awaken the desire to collect art. "This year, too, we wanted to underline our reputation as probably the most democratic art fair in the country. That's why we felt the need to offer young collectors an inspirational platform, for example through the special show on prints", says Britta Wirtz.

The next art KARLSRUHE will also take place at a warmer time of year and invites art lovers to the Karlsruhe exhibition halls from 4 to 7 May 2023. 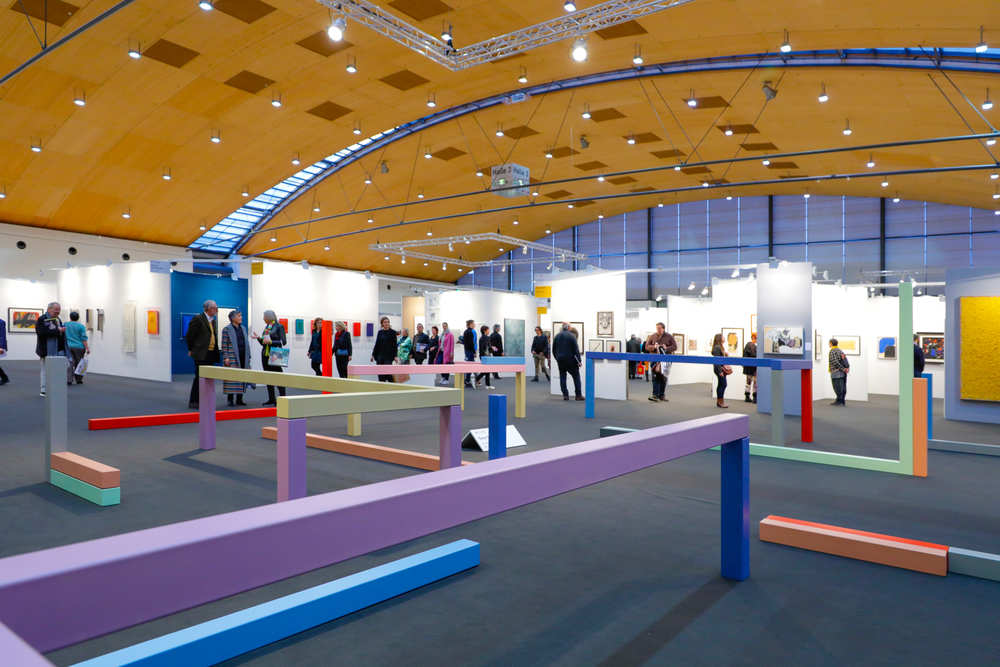 The prize winners of the third Loth Sculpture Area Prize - sponsored by the L-Bank are the artist Gary Schlingheider and galerist Rita Burster, galerie burster, Berlin. 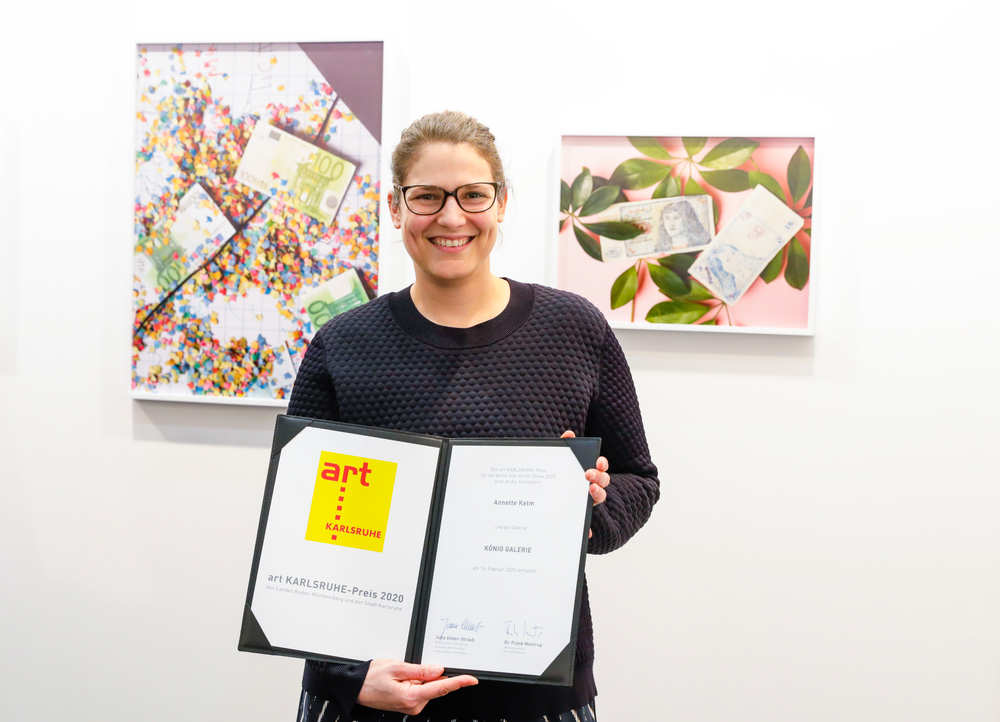 In 2020 the prize winners were the KÖNIG GALERIE and artist Annette Kelm. Kirsten Eggers, director of the König Galerie in Berlin accepted the prize on behalf of the artist. 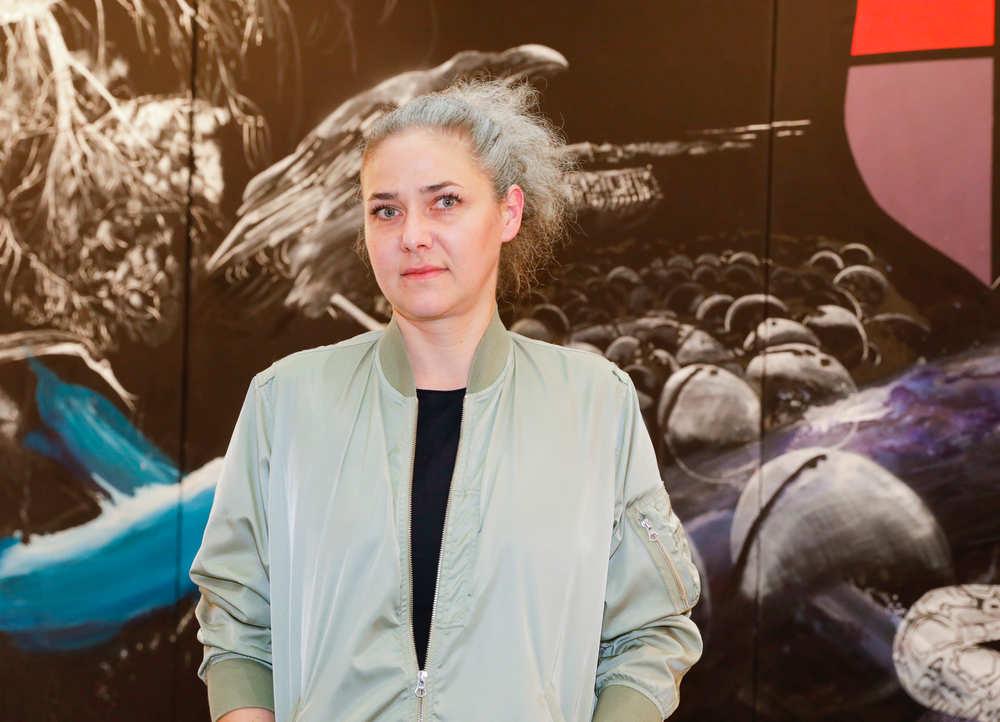 One of the oldest and best traditions at art KARLSRUHE is the annual conferral of the Hans Platschek Prize for Art and Writing by Hamburg’s Platschek Foundation. This honour is accompanied by an exhibition juxtaposing artworks by each year’s prizewinner and artworks by the painter and author Hans Platschek, who died in the year 2000. The Foundation made an exception this year and selected only paintings by Helga Schmidhuber, who was awarded the thirteenth Platschek Prize. Schmidhuber was chosen by Alexander Klar, director of Kunsthalle Hamburg. 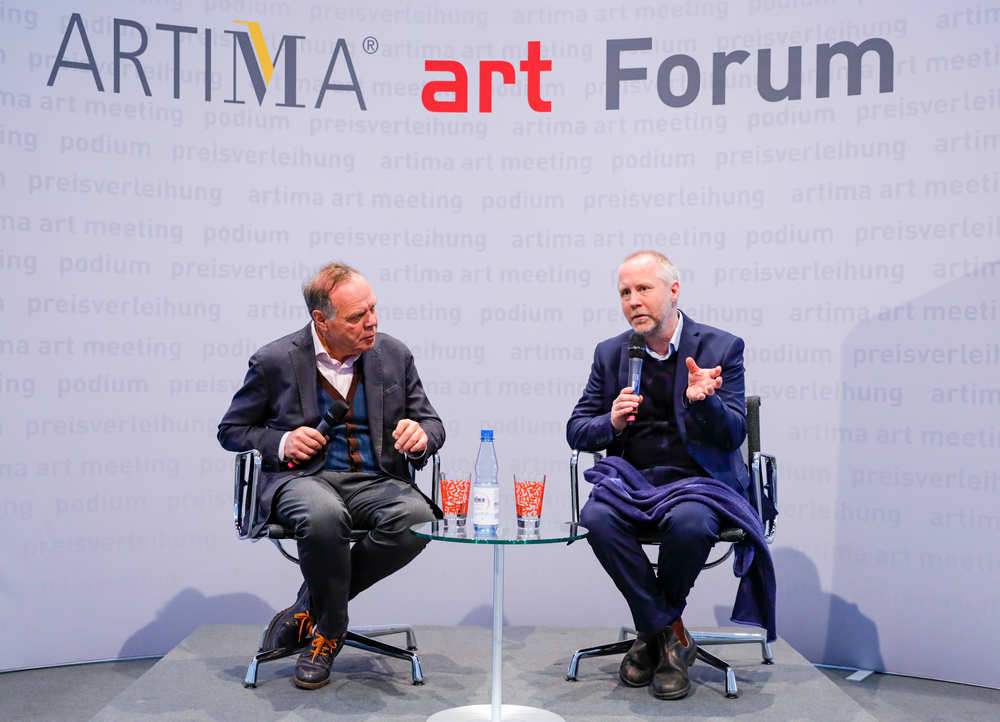 Devised by Lindinger + Schmid, moderated by the art critic Carl Friedrich Schröer from Düsseldorf, the ARTIMA art meeting at the 17th art KARLSRUHE was a question of sculpture.

To kick off Schröer talked with Dr. Felix Krämer, director of Kunstpalast Düsseldorf. He was followed by the sculptor Olaf Metzel. Both shared their experiences with sculptures in public space.

The presenters on the fair’s second day were the artist Vera Röhm, art KARLSRUHE’s curator Ewald Karl Schrade, and advisory board member Christian K. Scheffel, who is the initiator of the “Blickachsen” sculpture biennial. All three speakers focused their remarks on three-dimensional art.